QuantConnect and the Financial Challenges of Democratizing Finance

QuantConnect, a quantitative backtesting and trading platform serving mostly retail traders, recently announced a crowdfunding campaign seeking to raise money from its community of users. The company's associated regulatory disclosures (required by the SEC for equity crowdfunding offerings) reveal that the fundraising is a matter of survival. In this article, I explore what QuantConnect's financial statements reveal about the retail quant trading market.

According to QuantConnect's SEC filings and audited financial statements, the company lost $1.7MM in 2020 and $1MM in 2021, and as of August 2022 had approximately $411,000 cash on hand with a burn rate of $43,000 per month, giving it less than a year before it runs out of cash. So far, the crowdfunding money its users have pledged should keep the lights on for another 1-2 years.

QuantConnect's self-described mission is to "democratize finance," that is, to level the investment playing field by making sophisticated tools and data available to individual investors. In conjunction with the shuttering of Quantopian in 2020 — another company that aimed to democratize quant finance — the precarious state of QuantConnect's finances demonstrates the difficulty of carrying out such a mission.

While operating losses are common among early-stage startups as they build out their products and acquire customers, QuantConnect's losses are arguably more ominous as the company has been in business since 2013, giving it ample time to find product-market fit. Most of QuantConnect's revenue growth occurred in 2021, coinciding with a one-time influx of Quantopian users after Quantopian closed in late 2020. Following this one-time windfall, revenue has flattened off in 2022 with the company still underwater.

The company's strategy to become profitable, as outlined in its investor pitch, can best be summarized as a plan of expanding and growing more. The problem with this growth strategy is that QuantConnect already has the largest user community among retail platforms. If the company isn't profitable with 200,000 registered users and 1,500 paying subscribers, it's not clear how acquiring more users will help. (I'm reminded of the old sales joke: "We lose money on every customer, but we make it up on volume!")

My experience with retail quants

When I launched QuantRocket in 2018, I offered tiered pricing with a $350/year tier targeted at individuals with smaller accounts, plus a full-featured tier starting at several thousand dollars per year, aimed at wealthier individuals and firms. After trying this price model for two years, I eliminated the bottom tier, having concluded that small retail traders could not form the basis of a viable business model.

Here are the challenges I found in selling software to retail quants (other than wealthy ones), and why I think efforts like QuantConnect's to bring quant trading to the masses are unlikely to succeed.

QuantConnect's investor pitch states that it could instantly become profitable by doubling its prices. In reality, it would lose most of its customers if it did so. This has a lot to do with the age demographic of quantitative trading. Consider the following chart, which segments QuantRocket‘s website traffic by age range. As these stats reflect general website visitors, not just paying customers, they serve as a proxy for general interest in quantitative trading. 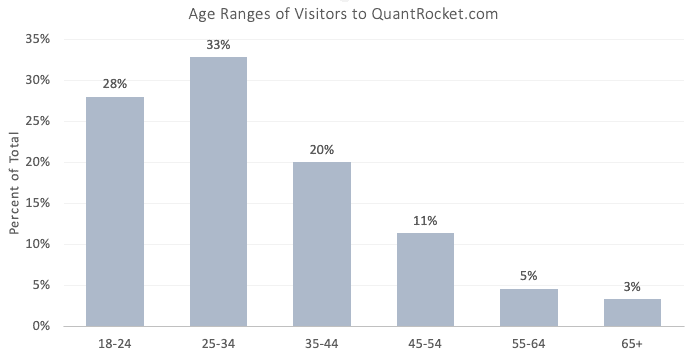 Interest in quantitative trading skews young: 61% of site visitors are between 18 and 34 years old. Whatever the reason for this skew, it means that there is a basic misalignment between the age of maximum interest in quantitative trading and the age of maximum wealth. Aspiring quants in their 20s and 30s are in the first decades of their earning years. Unless they inherited money, they are unlikely to have had time to accumulate substantial trading capital.

Do the math and you can see why QuantConnect can't just raise its prices. Imagine a recent college graduate who saves $100K of employment income by age 27, to be deployed on quantitative trading strategies. Saving that much money in that little time is no small feat and would place this trader in the top decile of wealth for their age group, making them quite rich by general standards. Yet spending more than the few hundred dollars per year that QuantConnect currently charges would be cost-prohibitive for such a trader, as it would eat up too much capital.

The mantra of many startups is grow now, monetize later. This is sometimes referred to as "blitzscaling" or "the MoviePass economy" (named after the short-lived company MoviePass that hemorrhaged cash by offering subscribers unlimited movie tickets for $10/month while paying movie theaters roughly $22/month for the average subscriber's resulting usage). The easiest way to grow a retail audience is to make your product free, or at least cheap. Whereas professional traders pick the trading platform they like best, cost-constrained retail traders flock to the lowest price. They flocked to Quantopian, which was free, and when Quantopian shut down they flocked to QuantConnect, which was the next cheapest option. Both companies relied on VC investment dollars to subsidize their users and offer their services below cost. (QuantConnect raised $6MM in 2018; Quantopian had several fundraising rounds.) As a result, both companies built large user communities, but monetizing those communities has proved challenging. (Quantopian creatively tried to monetize its users' ideas by running a crowdsourced hedge fund, but this business model ultimately failed.)

We should perhaps understand much of the retail interest in quantitative trading as aspirational. That is, many people want to be quants, but many of them will not be able to carry it out, if only because other responsibilities get in the way. In contrast, professional traders, by definition, have already traveled further along the vocational path of trading; they are thus a more dependable and predictable customer segment.

The combination of price sensitivity and time constraint results in high churn rates for retail quants. Even if a software provider manages to attract a continual stream of new retail customers, much of the new revenue they bring only replaces the lost revenue of churned customers.

While every consumer business deals with churn, it's a bigger problem for quant software providers. The only way a business model that involves relatively low prices and high churn can be profitable is with an endless supply of new users, but quant trading is a niche market. This statement might seem counterintuitive. Isn't quant trading the future? Ever more capital will surely be managed quantitatively in the future, but this will mainly result from professional money managers adopting quantitative methods. It doesn't mean that every retail trader will be a quant, any more than the dominance of technology in society means that everyone will soon be a software developer. Numerically, coders and quants will always be a small and intellectually elite minority.

What's next for QuantConnect's retail community?

The world of retail quant trading is a small one, and most everyone in it has already heard of QuantConnect and probably tried its service at some point in time. The company's penetration of the retail market is thus already too deep, and its revenue shortfall too large, to make it plausible that additional retail market penetration can lift the company to profitability. If acquiring more retail users isn't a viable solution, and if raising prices on existing customers would drive them away, seemingly the only other option is to pivot to non-retail customers with more money to spend.

QuantConnect's investor pitch hints at the possibility of such a pivot. It projects aggressive revenue growth based in part on the size of institutional markets it implies it will soon enter, although it's hard to distinguish marketing hyperbole from actual business strategy. (The pitch deck invites investors to imagine QuantConnect becoming the software that "underpins every investment on the planet" by 2030, a claim sufficiently unrealistic for any single company given the size of global capital markets that it should give sober investors pause.)

QuantConnect probably hopes it can keep its small retail traders while adding large institutional ones, and perhaps it can, but retail and enterprise customers have different needs, and it's hard to serve two masters. As an example, fully hosted platforms like QuantConnect's are attractive to small traders who don't want to manage their own servers but are unattractive to many institutions who want more in-house control. Or to give a related example, consider Beacon, an enterprise financial software company listed as a competitor on the comparison slide of QuantConnect’s pitch deck. The comparison is rather implausible. Beacon’s platform enables in-house developers at financial institutions to collaboratively develop custom apps and analytics to share across their organizations and thus overcome institutional silos; it is a very different product that illustrates the very different needs of enterprise customers.

Every business must choose where to focus its energy, and QuantConnect's retail users may end up disappointed whatever the company does. If QuantConnect fails to pivot upmarket, it risks going out of business; if it does successfully pivot, its service will inevitably evolve to fit the needs of the non-retail customers paying the bills. If that happens, there will be an irony in the current crowdfunding campaign. QuantConnect's community of retail quants will have chipped in their money to help keep the lights on long enough for the company to pivot and leave them behind.

QuantRocket is a Python-based platform for researching, backtesting, and trading quantitative strategies. It offers a suite of data integrations and supports multiple backtesters: Zipline, the open-source backtester that powered Quantopian; Moonshot, a vectorized backtester created in-house; and MoonshotML, a walk-forward machine learning backtester. Built on Docker, QuantRocket can be deployed locally or to the cloud and has an open architecture that is flexible and extensible. Its backtesters are particularly well-suited for running data-intensive strategies that competing platforms often struggle with, such as cross-sectional or market-neutral strategies targeting large, dynamic universes of securities.

Install QuantRocket now to get started.

3 Takeaways from Quantopian Shutting Down

Quantopian announced that it is shutting down its community platform. This doesn’t entirely come as a surprise.

Get the Global Trading Blog delivered to your inbox

QuantRocket LLC is not a financial advisor and nothing on this website or in any materials created by QuantRocket LLC should be construed as investment advice. All results are hypothetical unless otherwise noted. Past performance is not indicative of future results.

In addition, the material offers no opinion with respect to the suitability of any security or specific investment. No information contained herein should be regarded as a suggestion to engage in or refrain from any investment-related course of action. Neither QuantRocket LLC nor any of its affiliates is undertaking to provide investment advice, act as an adviser to any plan or entity subject to the Employee Retirement Income Security Act of 1974, as amended, individual retirement account or individual retirement annuity, or give advice in a fiduciary capacity with respect to the materials presented herein. If you are an individual retirement or other investor, contact your financial advisor or other fiduciary unrelated to QuantRocket LLC about whether any given investment idea, strategy, product or service described herein may be appropriate for your circumstances. All investments involve risk, including loss of principal. QuantRocket LLC makes no guarantees as to the accuracy or completeness of the views expressed in the website. The views are subject to change, and may have become unreliable for various reasons, including changes in market conditions or economic circumstances. Past performance is not indicative of future results.

For sales questions or general info, email Brian Stanley at brian@quantrocket.nobots.com or use the form below.

(For technical support, please use the support forum.)